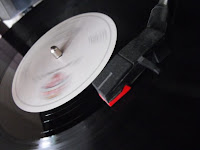 A good old fashioned record doesn’t do that. You can’t put a turntable in your car (not since the invention of the speed hump at any rate). You can’t spin a Long Player on your jog. Records are beautiful, bulky delicate things that need to be handled with love. So when you put on an LP you have to carefully drop the needle onto the crackly surface, sit down in your living room and actually listen to the warm sounds flowing forth. A little ritual to pay homage to the miracle of recorded sound, to the fact that this music is so good it couldn’t be left in the moment it was played, but instead needed to be preserved to be repeated and enjoyed again and again.
Posted by .44 Pistol at 12:06